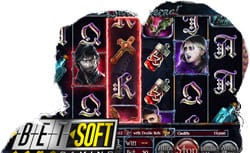 For the dark side of any player, Blood Eternal is not a bad slot machine to choose. It focuses on a macabre world of zombies and bats. Betsoft got into the zombie craze with Blood Eternal, instantly giving it a built-in fan/player base. They infiltrated the craze successfully. As the graphics and sound effects used in the game are leaps and bounds ahead of the competition in terms of quality.

Betsoft got into the zombie craze with Blood Eternal

In the background behind the reels is a dark, eerie room lit by nothing more than a few lighted candles. And a window near the ceiling lets in some light. An antique lamp and a painting of a man hanging on the wall are the objects that complete the game’s background scene. The brightest color used in the background is the yellow of the lit candles. With everything else being dark colors such as black, gray, red and green with some light blue buttons and graphics. Overall, the visual theme of the game is suppressed and calm.

While the symbols seen on the reels of most video slots are fairly standard, Betsoft thought outside the box by using text written in blood as the game’s wild symbols. These symbols even pay out winnings if luck is one a player’s side. Even better is the bat symbols that take on the role of multipliers. When the reels become covered with double bat symbols, the non-progressive jackpot is awarded. 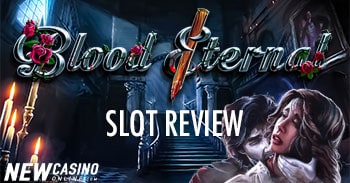 The method for triggering free spins is distinctive compared to other slots. With humans and zombies both appearing on the reels, having one appear directly next to the other one melds them together and triggers the free spins. The newly formed symbol of the human and the zombie stays locked onto the reels until the free spins have been completed.

With eight free spins, players may win only a few coins or they may walk away with a bigger win than they could have dreamed of. The double symbol used during the free spins bonus is of a vampire being bitten by a human. When this appears during a spin, anywhere from one to four wilds may be added to the reels.

Not for the faint of heart, Blood Eternal is an adrenaline rush that isn’t suited for just anyone. Far from being a happy-go-lucky game, its dark nature appeals to some players in a powerful way. With the free spins bonus, this can be a profitable one. The only drawback is that if one is not paying close attention, it is possible to bet and lose a significant amount of money in only a few spins. While this game is suited to casual gamblers, it should also please those who are in it to win and have money to burn.

Not for the faint of heart, Blood Eternal is an adrenaline rush that isn’t suited for just anyone

The maximum stake in this game deducts $150 from a player’s balance with every spin of the reels. This is a great feature for some but a dangerous feature for others. Otherwise, Blood Eternal gets four out of five stars for its entertainment quality.