Who here hasn’t heard of the classic movie franchise Terminator? The first two movies were very popular – and the second of the two is widely thought as one of the best movies ever made. Arnold Schwarzenegger, a Hollywood badass of immense proportions, has managed to outdo himself in these movies. And since the Terminator movies are so immensely popular, it goes without saying that there ought to be gambling games that follow the theme. And indeed, this is the case – today we will be talking some more about Terminator 2, the slot game made by Microgaming. Even though it did not make it to our top 3 movie-themed slots it is still a classic that is immensely fun to play. 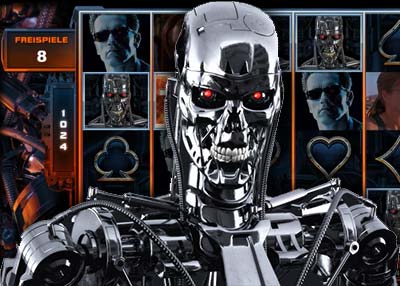 The basics of the slot game Terminator 2

It goes without saying that the symbols will be to the theme of the Terminator movies. You will be able to find your favorite characters of the movies here. T-100, Sarah Connor, John Connor, and T-1000 all make an appearance here. They have a different value, so if you want to know which symbols are the most powerful and most valuable, then you should check out the paytable section of the game.

As far as the gameplay goes – there is nothing that we could say that’s out of the ordinary. The base game is in five reels and three rows. You have, in total, 243 ways to win. This is quite a lot when you consider the fact that many of the slot games feature no more than 20 pay lines. There is an additional way in which you can increase the number of ways to win from 243 ways to 1024 way – but more on this a bit later.

The atmosphere is a judgment day

The background in this game is a conundrum of metallic machinery. We’re aware that some of you won’t really like the background at all. We can’t say that we personally liked it either – it’s bland and way too metallic. Most people really enjoy looking at beautiful sceneries of nature. This background is in stark contrast with this. But there will undoubtedly be a subset of people among you that would enjoy the background. And still, there will be people that will be indifferent to the background.
There are also some very poignant scenes of the movie that you can see in this game. All you need to do is get a big win – and you will be shown various clips of the movie itself. It’s a nice addition to the overall Terminator atmosphere of the game and you will find that the videos are of high quality.

Where the game shines in the special features section. The first special feature comes in the form of the T-800 vision. The color of the entire screen turns to red during this feature and you will get cash rewards for certain kinds of symbols that are to be found on the reels for that particular spin. But the fun doesn’t end here.

And during the free spins, if you get the T-1000 symbol (the main antagonist in the movie), then it will be able to change forms and take the form of any symbol so that you will be awarded the greatest win possible for that particular spin combination. If you check some videos on YouTube, then you will see that here it’s possible to make huge wins. There are people that have won thousands and thousands of euros on this feature alone.

By the way, the T-800 vision feature cannot be manually activated by you. It’s up to blind luck – the more you spin the reels, the bigger your odds become of this feature becoming active. And the feature gets activated on a non-winning spin.

We can’t say with clear conscience that this is a flagship game. The materials are there – the theme of the Terminator movies, the music, the symbols, the background, the overall atmosphere, and the way the game plays. But somehow, we felt that this just wasn’t quite enough to blow our minds.

However, we can’t really deny that this game has its charms either. And this goes especially if you’re a fan of the Terminator franchise (as we are). We have managed to stay glued to the screen for hours on end while playing this game – everything gets immensely better once you hit the ten free spins. We hope that you will have a lot of fun while playing this game yourself.