Planet of the Apes

If you’re a fan of the Planet of the Apes movies made in Hollywood, then we have some exciting news for you. One of the best-known companies that specialize in the field of designing online slot games, NetEnt, has created what’s known as one of their best slot games – Planet of the Apes slot. This game has some pretty nice features that will keep you glued to the screen for hours on end. This without feeling even the slightest tinge of boredom. So, what’s this game all about? And should you play it? Read this review in order to find out.

Graphics and music – Planet of the Apes slot

The music of this game is everything you would expect from NetEnt. NetEnt has a pretty much flawless track record when it comes to the soundtracks of their games. So the soundtrack of Planet of the Apes is pretty dramatic. It will help you get into the overall atmosphere of the game. You will feel like there is an impending and imminent attack coming from the apes. The graphics and animations are top-of-the-line. They are all excellently designed. We think that you will love the beautiful visuals of Planet of the Apes. From time to time, you will be given the opportunity to see a video. Most videos in the game are dramatic and they give you a view of the attack of the apes.

The videos are played after a big win that you will make on the reels. The music, the graphics, the sounds – the entire atmosphere of the game will invite you to keep playing it and it will captivate your attention. NetEnt have really hit it big with this game when it comes to the graphics and music. We think that you will love what they have done with this game in this sense.

Briefly about the features

This game features several unique features. First, the game itself is played on two separate screens. The first half of the screen is the “Rise of the Planet of the Apes”. The second half of the screen is the “Dawn of the Planet of the Apes”. The first one is light, and the second one is dark. Both of the screens have 5 reels and 3 rows with 20 fixed pay lines. The return to player is set at 96.33%. The biggest win comes at 3,000x of your original bet. It is a huge win no matter what your bet size was. You can win a maximum of 600,000 coins in this way. You can play this game on desktop, tablet, and mobile. The experience will be smooth and fun on all of these platforms. There is an autoplay feature that you can use if you just want to relax and watch as the game practically plays itself.

Since this is a game centered on the Planted of the Apes movie, you can expect to see some of the characters from this movie. Of course, there will be symbols of apes as well. The wild symbol is the most powerful and most valuable symbol in the game. There are also scatter symbols, separate for the two different halves of the screen. The scatters will give you free spins and they can also give you additional coin wins. The Dual Symbol feature that this game is known for can be triggered randomly at any moment while you play. You will see some apes running through the screen. Then two giant random symbols will fall on the two halves of the screen. Then, random symbols will continue to fall from the screen – if the symbol matches the symbol in the particular half where it has fallen, then it will become sticky. If the symbol that matches the symbol from one half falls into the other half – then it will be reallocated to the other half. 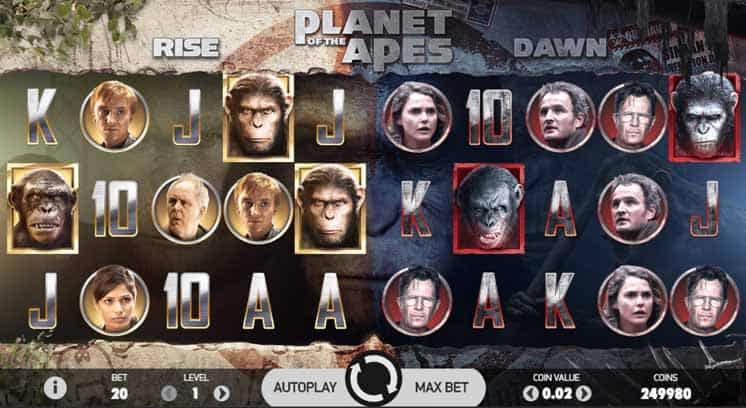 Last words on Planet of the Apes video slot

We think that you will love Planet of the Apes slot no matter what kind of games you like. If you have the chance, be sure to try it out and to have fun with it.