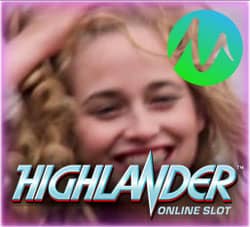 Fans of the 1980s movie Highlander are now enjoying the slot machine game based on it. This is not Microgaming’s first movie based slot machine and won’t be its last either. Like most of their slots, this one features the 243 ways-to-win. This is just one of the reasons for its popularity. Since the game was released at the end of 2017 it has already gone on to become a favorite among many online casino players. It is safe to say that this slot machine game has already surpassed the movie it was based on, in terms of popularity. While the movie was originally considered a flop, its later achievement of becoming a cult classic is no doubt what led Microgaming to create Highlander.

The game takes players through the same journey that the characters in the movie traveled. It starts in Scotland’s mountains and progresses all the way to New York City, just like the movie did. Players that have seen the movie will recognize the game’s soundtrack and graphics. The background scene players’ view while spinning the reels consists of mountains and stone walls against a Scottish landscape.

The main characters in the movie serve as the game’s valuable symbols. The symbols represent Connor and Heather Macleod, Brenda Wyatt and Kurgan. The Highlander logo is the wild symbol in this game, which it pays to keep an eye out for. One of the features of this game to look out for is the quickening wilds.

The other symbol to look out for is a golden crest, the scatter symbol that triggers the free spins bonus under the right circumstances.

With three or more of the scatter symbol on the Highlander reels in a single spin, 10 free spins are activated. It is at this point in this game that players make the virtual transition from Scotland to NYC. During the free spins bonus the quickening wilds come into play. If lightning hits the symbols they will be transformed into wild symbols. Scatters can also appear during this round. If there is a pair of them on your reels at the same time, they temporarily become wild symbols. This changes the combination of symbols on the reels and can often make it much easier to win money. The only downside to the free spins bonus feature is that, unlike other games, free spins can’t be retriggered at any point during the bonus game.

While this game may be a real treat for fans of the movie, it doesn’t have much to offer anyone else. There is nothing particularly extraordinary or impressive about it. The graphics and sound effects are two dimensional and may seem random to those who haven’t seen the movie. However, it is always good for anyone who simply enjoys getting free spins. Since the game doesn’t have much else to offer, its appeal lies in the nostalgic factor that it gives to certain players. Everyone else may struggle to enjoy it.